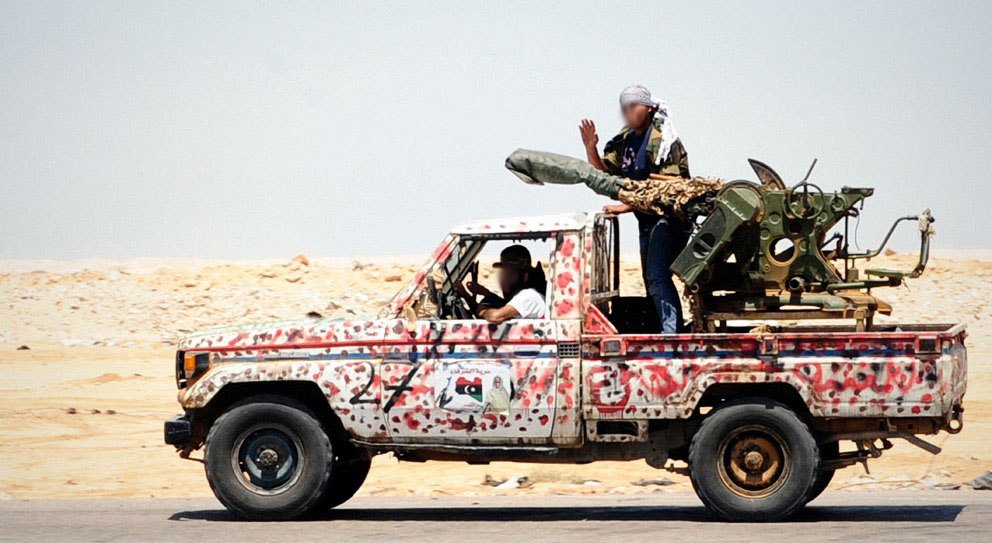 For my third in a row photo recreation project I decided to do something totally different. At first I considered building a civilian car, an old truck or something. But then I came across the photo above and I immediately fell in love with this crazy improvised camouflage. The photo was taken during the war in Libya where there was plenty of technicals like that. From the start I knew this weird camouflage will be the biggest challenge of the project. But well, without challenges there’s no fun.

A bit of history

The use of fast motorized units with improvised weapons dates back to the WWII. During the African campaign a British Army officer David Stirling had a ground-breaking idea. He believed a little group of soldiers could do a substantial damage with a series of covert raids behind enemy lines. No tanks, no artillery, no bombers – just a couple of well-trained operators moving quickly. It took Stirling some time and effort to persuade his superiors to this new tactic. But finally he was ordered to form such a unit under a pompous name – L Detachment Special Air Service Brigade. It was meant to convince the Axis spies that there’s an entire airborne brigade operating in Africa. But the name stayed and that’s how SAS – the famous British elite unit –  was born.

SAS commandos during his raids used heavily modified Willy’s jeeps. The cars were equipped with a dual Vickers K machine guns operated by the passenger. Willy’s also carried a huge amount of cannisters with petrol and water as well as all the supplies needed to operate independently in the desert. SAS units soon started to attack German airfields. The jeeps would just storm the base and open fire to the aircrafts without even slowing down. This tactic proved really successful and by the end of the African campaign the early British ‘technicals’ destroyed at least 250 German aircrafts.

Much later, in 1987, the Chadian army equipped with improvised fighting vehicles was able to defeat the more regular Libyan forces. As the technicals used by Chad were mostly Toyota pickups (Hilux and Land Cruiser) the conflict was soon dubbed the Great Toyota War.

The term ‘technical’ itself comes from Somalia in the early 90′. Some private security agencies were hiring mercenaries, but officialy the expense was filed as ‘technical assistance’. The term would quickly gain popularity and it is now used to describe any civilian car with improvised weapons. Toyota pickups are know for their reliability and sturdiness, so naturally they became one of the first choice. The technical will usually be armed with a heavy machine gun, a recoilless gun or an AA auto-cannon. The safety of the soldiers isn’t usually a priority, although there are technicals partially or fully covered with armoured plates.

A technical seems a perfect weapon in guerilla and terrorist tactics. It is very cheap, fast and reliable. Armed pickups can move quickly providing the element of surprise and run away before the regular army can regroup and fight back. So it makes sense that the tacticals has been playing a great part in many local conflicts, especially in north Africa and the Middle East. We could see them all around the news when the Arab Spring, a series of armed rebellions, burst out a couple of years ago.

One of those uprisings was the conflict in Libya in 2011. A series of protests against the dictatorship of Muammar Kaddafi escalated  to a regular civil war. The vehicle I’ll be working on was used in Libya by the rebel forces.

Let’s look at other technicals from Libya as it’s a goldmine for us modellers.

The thing is not nearly as complicated as my previous projects. But I still need to point some things out. It’s obvious this Toyota Land Cruiser has a history of wear and tear. Even leaving the war aside, the car doesn’t look like it was waxed and vacuumed every Sunday.

The gun was stripped of any unnecessary parts like optics. Because why would you need optics, right? There’s also no wheels and no towing mount. Instead, the cannon was fixed permanently on an improvised (I’m going to use that word a lot here…) platform. I also noticed that the back rest of the seat is covered with a plastic bag or something.

The main part of the gun looks pretty rusty. This might be dust as well, I’m not sure yet. 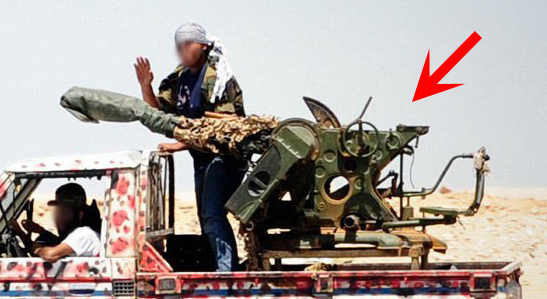 Moving on, a part of the left window is missing and replaced with brown paper or adhesive tape. There’s also a poster on the door probably praising a local leader. 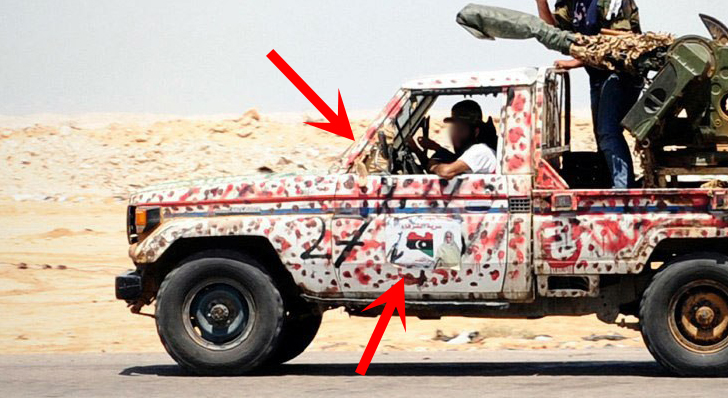 And then there is the camouflage itself. As far as I can see it was painted with a spray – a regular can of paint a typical teenager would use to ‘express himself’ (a.k.a. vandalize stuff) in our cities. I see two colours there: one is dark red or brown. This colour is sprayed in small dots and has more opacity. The other colour is a semitransparent red. It was sprayed in bigger spots, partially overlapping the darker colour. There are also streaks of paint – a typical effect when you hold the can at one place for too long. 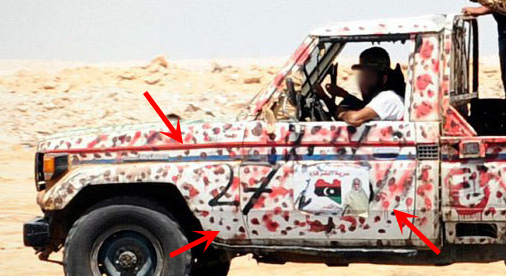 There’s not much competition as long as the technicals go. Meng released a model with a ZPU-2 cannon which works perfectly for me. 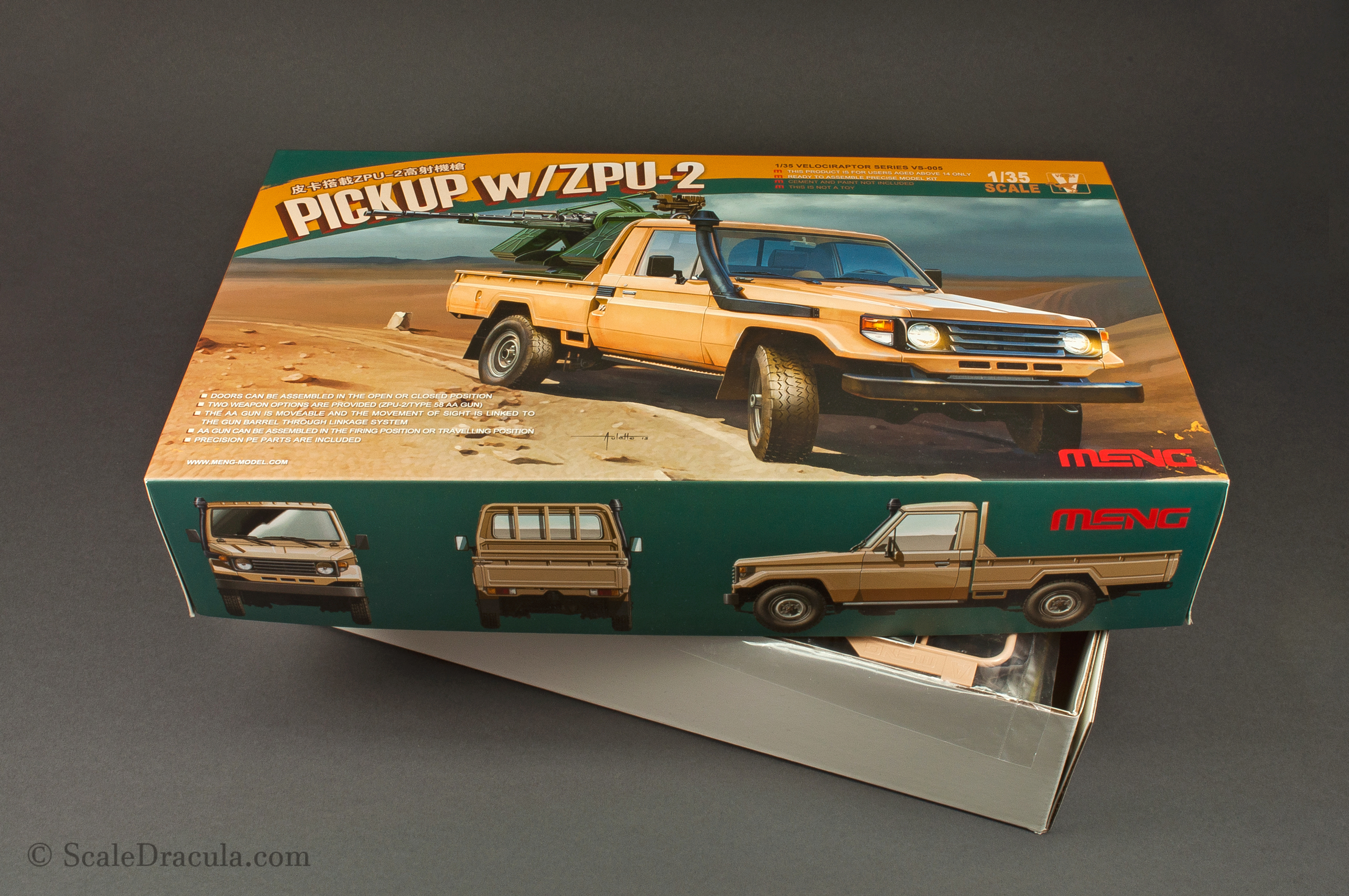 Before assembly the parts look really well, I can see some very nice details of the interior. 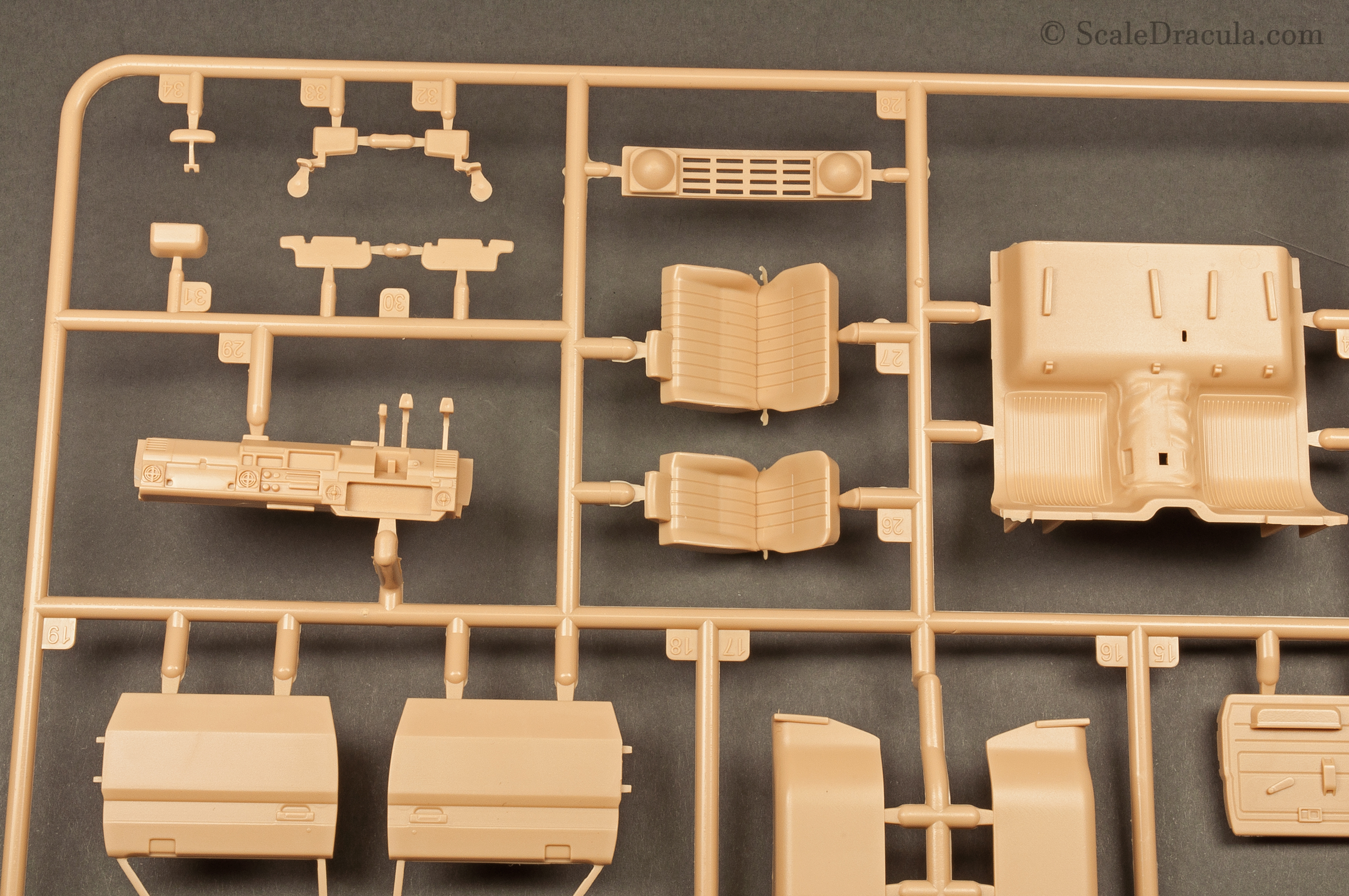 Meng gives us an opportunity to build the ZPU-2 in two versions: Russian and Chinese, so both types of barrels are included. Good move, Meng! 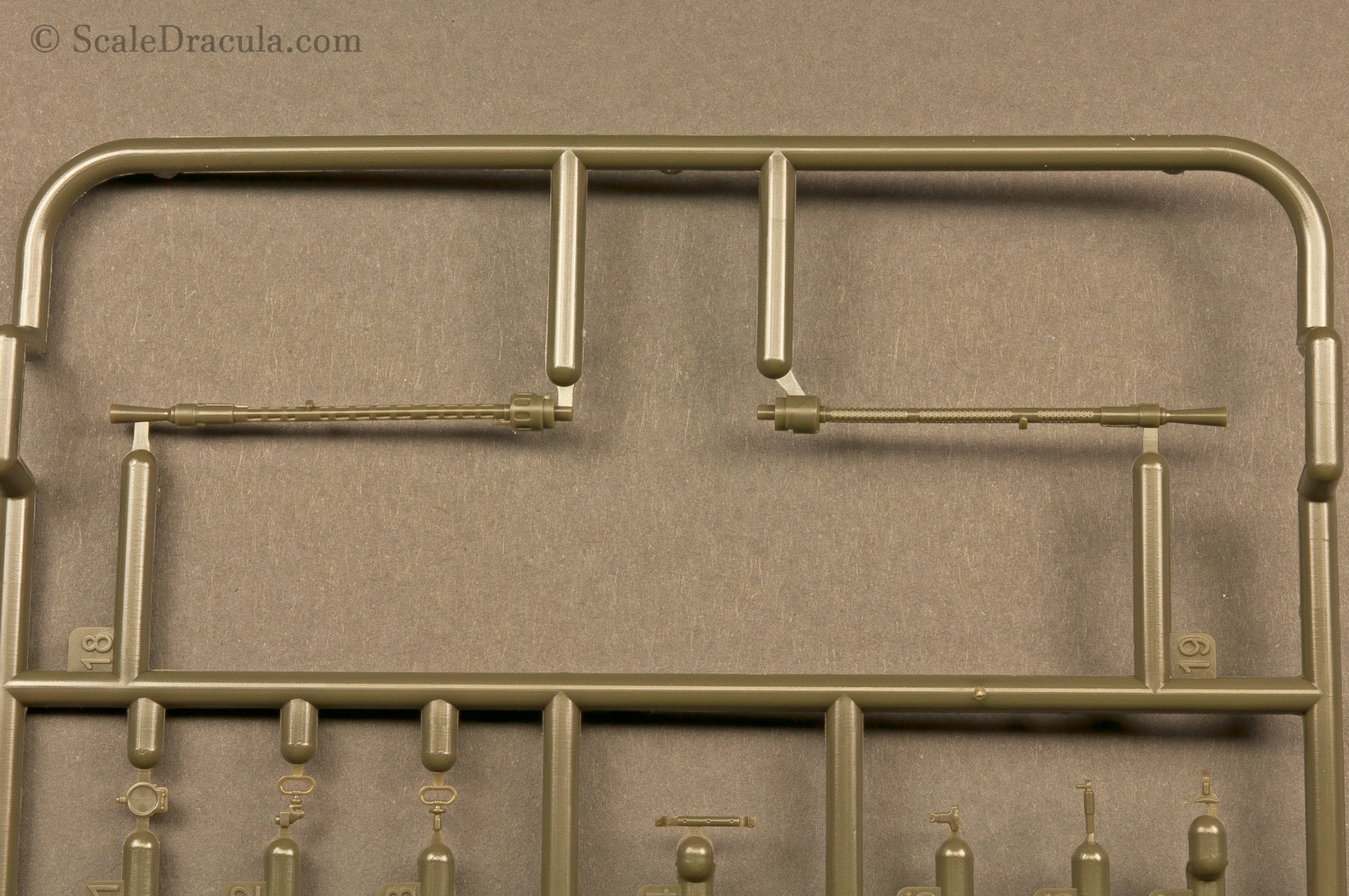 The stock barrels aren’t bad but I still decided to buy replacements. I’ve chosen a set by Master Models. I used their barrel for my BRDM-2 project and I was very satisfied with its quality. This kit is similar, although the anti-air version of the KPVT is slightly different from the tank variant. You get a barrel, a jacket, some PE parts and a resin handle. The quality is top notch, I especially like the fact that the barrel and the jacket are two separate parts – like on a real thing. 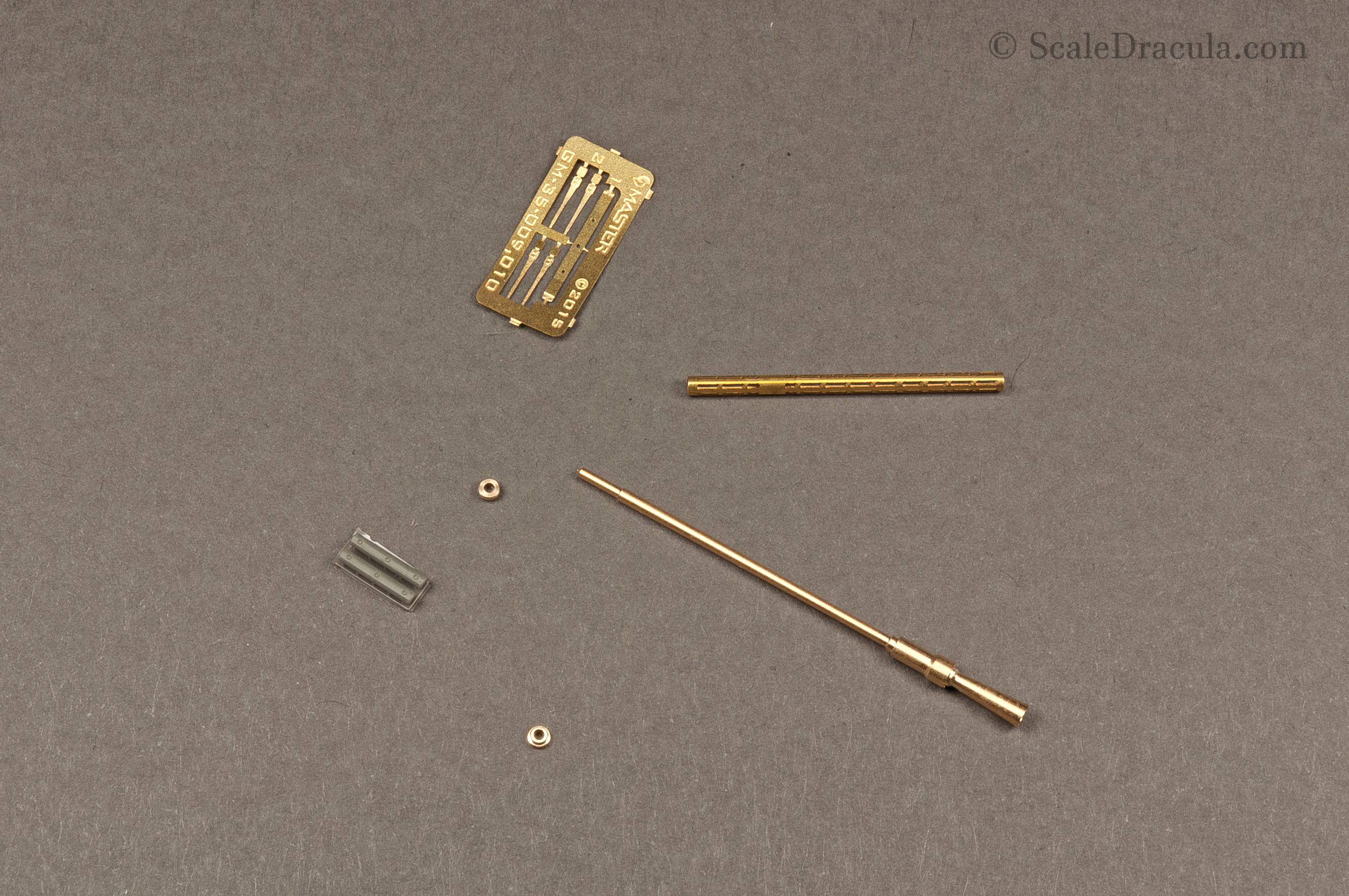 Coming back to the basic kit – there a small sheet of PE parts included, as well as some decals for the interior and rubber tyres. 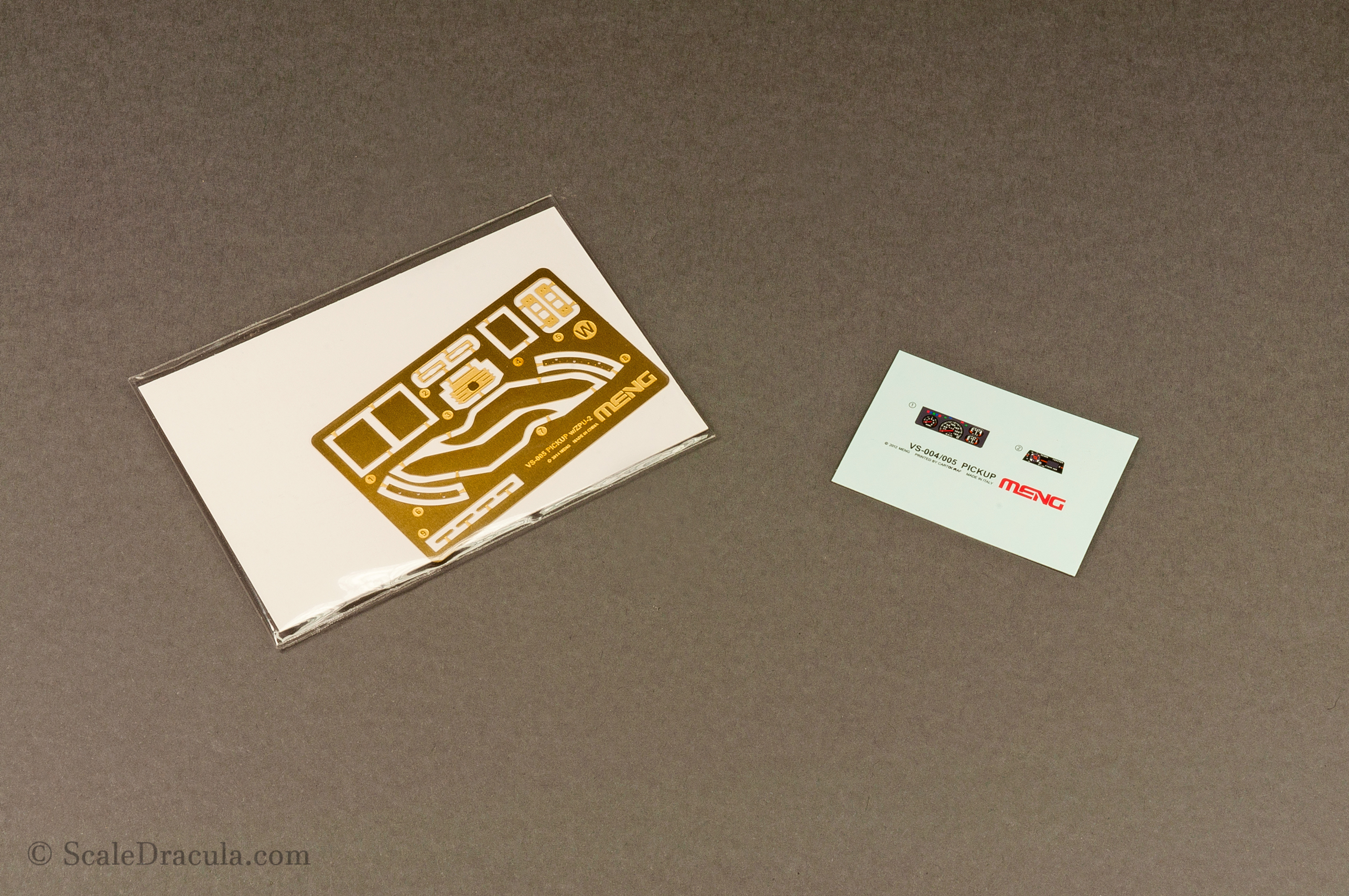 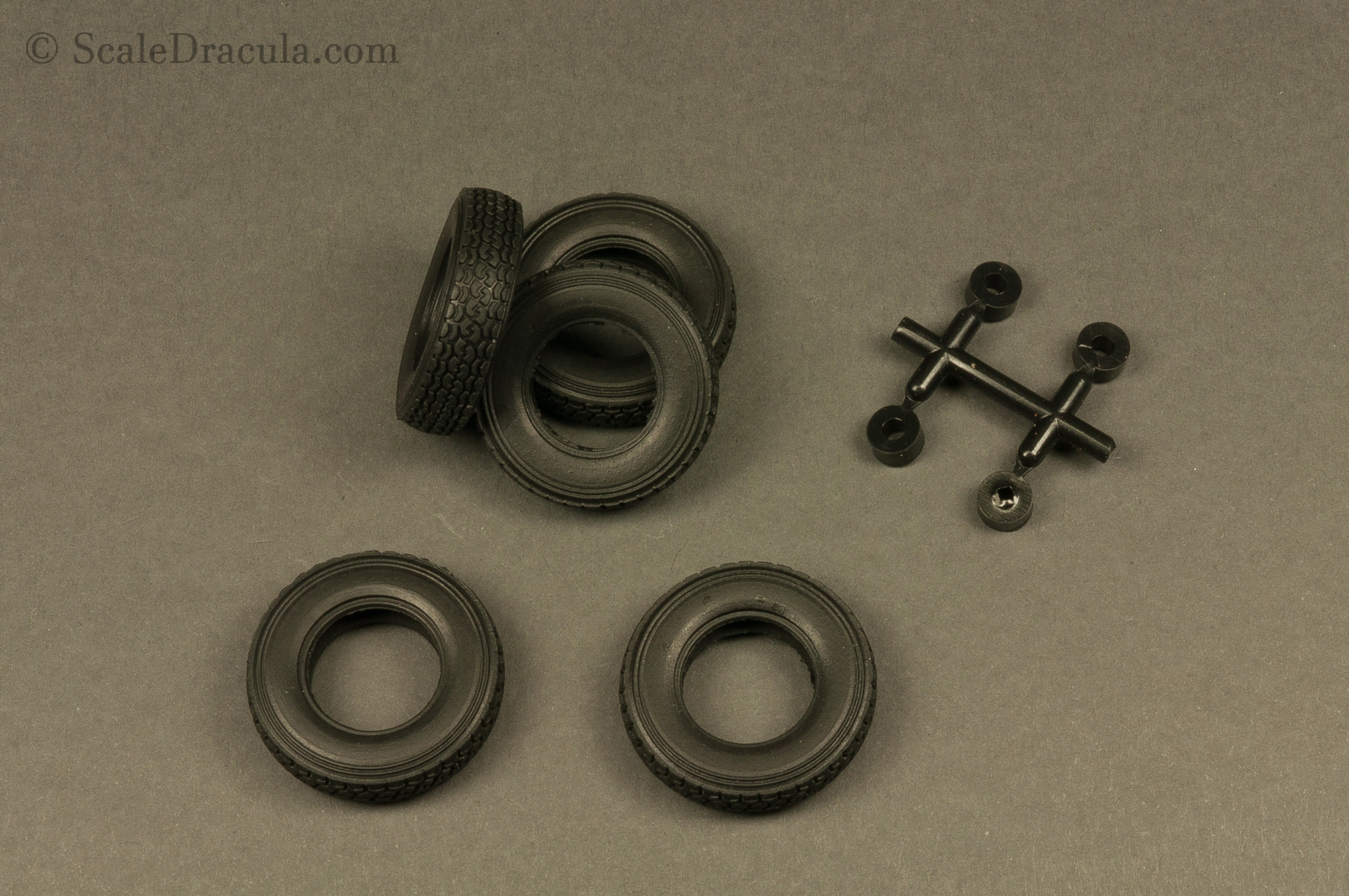 And that’s pretty much it. I think I’ll add a lot of accessories to this model, but I’m not sure what exactly. I still have time to decide though. The next step will be to build this puppy quickly. This is a simple model, so I don’t want to waste time on the construction, I’d rather get to the painting as soon as possible.

If you want to get some more frequent updates on this project, visit my Facebook page. I usually post there some fresh pictures straight from my bench.